FOR THE DOUGH:
500g Strong white flour
10g Fast acting dried yeast (I use Doves Farm)
10g Salt
50g Olive oil
320g Water at room temperature
Oiled baking tray ideally with a lip or line your baking tray
if its not very non stick like mine. (mine is 24cmx34cm but I sometimes
use one a bit bigger than this and that is fine to)

FOR THE TOPPINGS:
Olive oil
For the recipe opposite I have used rosemary (fresh) &
sea salt
But you can use olives, tapenade, spices or other herbs – I often top
with 3 different toppings in segments to have a variety.

I love making bread and this is my families favourite.  It never lasts more than a day and my kids love it warm.  I have a mixer with a dough hook which makes everything so much easier but if you are making by hand and want to see a master at work then check out Richard Bertinet on YouTube.

Using a mixer, put the water in the bowl and the oil.  Top with the flour and put the yeast on one side and the salt on the other.  If they mix too early the salt makes the yeast less active.  Mix for 2 minutes on a slow setting and then increase to a medium setting for about 8-10 minutes.  The dough should lift clean away from the sides, neat and springy in texture.
Remove the dough from the bowl and use a dough scraper (totally invaluable) to move the dough around the work surface to make a tight springy ball.  I don’t use any flour on my granite kitchen surface but if you do, keep it minimal.
Put it back in the bowl, cover with a tea towel and leave for an hour or more until it nearly doubles in size.  Depending on the temperature, it can sometimes take a couple of hours.

Once the dough has proved, put it onto your baking tray. (oiled or lined).  You want to slightly push it down so its has a flat top.  Now add a couple of tablespoons olive oil to the top and using your fingers push the dough outwards towards the sides of the tray.  You should find it quite easy with the oil and you are aiming to flatten it out to fit the tray evenly.

Re-dimple your dough, Add your rosemary sprigs & a sprinkle of salt.  Bake in your pre-heated oven to cook for 20-25 minutes until its nice and golden.
Once baked, cool on a rack and add a drizzle more oil and a sprinkle of salt whilst it’s warm.  This soaks in an makes it even more delicious.

*Because the dough oily, I surround the baking tray with some taller kitchen implements and drape my cover over these to stop it soaking up the oil.

To Drink: Pair with any of the Drinks Kitchen aperitif alongside some dips, olives, meats or cheeses. 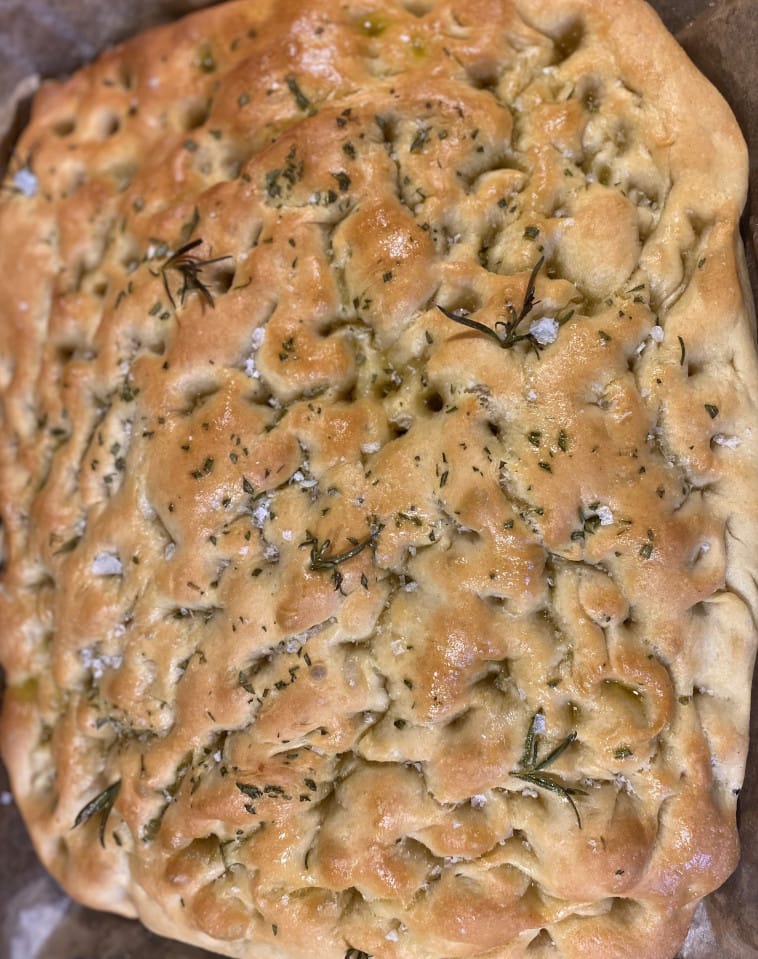 Shop Here
We use cookies on our website to give you the most relevant experience by remembering your preferences and repeat visits. By clicking “Accept”, you consent to the use of ALL the cookies.
Cookie settingsACCEPT
Manage consent

This website uses cookies to improve your experience while you navigate through the website. Out of these, the cookies that are categorized as necessary are stored on your browser as they are essential for the working of basic functionalities of the website. We also use third-party cookies that help us analyze and understand how you use this website. These cookies will be stored in your browser only with your consent. You also have the option to opt-out of these cookies. But opting out of some of these cookies may affect your browsing experience.
Necessary Always Enabled
Necessary cookies are absolutely essential for the website to function properly. These cookies ensure basic functionalities and security features of the website, anonymously.
Functional
Functional cookies help to perform certain functionalities like sharing the content of the website on social media platforms, collect feedbacks, and other third-party features.
Performance
Performance cookies are used to understand and analyze the key performance indexes of the website which helps in delivering a better user experience for the visitors.
Analytics
Analytical cookies are used to understand how visitors interact with the website. These cookies help provide information on metrics the number of visitors, bounce rate, traffic source, etc.
Advertisement
Advertisement cookies are used to provide visitors with relevant ads and marketing campaigns. These cookies track visitors across websites and collect information to provide customized ads.
Others
Other uncategorized cookies are those that are being analyzed and have not been classified into a category as yet.
SAVE & ACCEPT

Sign Up & Save £2 per bottle off your first order.

Sign-up and join the new wave of flavourista's who don't need alcohol to have fun.

Welcome to the Drinks Kitchen family! You have subscribed and we will keep you up to date with our launch. Best wishes Alli x